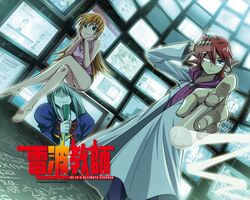 Denpa Kyoushi (電波教師) is a weekly manga series by Takeshi Azuma about a 22-year-old Otaku named Kagami Junichirou who reluctantly becomes a teacher. The series appears to be inspired in theme and spirit by another manga series called Great Teacher Onizuka. However, the lead character in GTO, Onizuka, uses notoriously rough and effective tactics, whereas the protagonist of Denpa Kyoushi, Kagami, handles problematic students in the "Badass Bookworm" way.

Kagami Junichirou was known as a physics genius as a teenager, and he was even published in "Nature." However, after college, he suddenly lost all interest in science and becomes a NEET. Instead of pursuing further education, a job, or employment training of any sort, he has devoted himself to his anime blog and nerdy collecting habits. He claims he has a serious condition known as "YD". He claims that he cannot do anything he does not "yearn to do". Desperate to get him to do something with his life, his little sister Kagami Suzune manages to get him a job teaching physics at his old high school. He's certainly an unconventional teacher, but he becomes fairly popular with the students. After helping an girl who's being ruthlessly bullied, Kagami finds that he actually likes teaching. Will he continue his career as a weird teacher? Will he go back into physics? Or will he end up back where he started?

Community content is available under CC-BY-SA unless otherwise noted.
Advertisement